Acelga is not only the Spanish term for chard, the nutritious and vitamin-rich vegetable, it is also the name of an equally energetic woodwind quintet. Founded in 2012 by the five young musicians Hanna Mangold (flute), Sebastian Poyault (oboe), Julius Kircher (clarinet), Amanda Kleinbart (horn) and Antonia Zimmermann (bassoon), the group quickly established itself as one of the leading quintets of the younger generation. In 2013, the Acelga Quintet was awarded a scholarship from the German Music Council at the German Music Competition in Stuttgart and was included in the Council’s 58th Young Artists concert series. In the following year, the quintet won third prize in the 2014 ARD Music Competition. The group performs regularly both in Germany and abroad, including at the Rheingau Musik Festival, Bachfest Leipzig, and Mecklenburg-Vorpommern Festspiele, and it has made numerous recordings for well-known broadcasting organisations. For its debut album Bohemia in collaboration with SWR and GENUIN classics, the quintet received a special prize from the Oscar and Vera Ritter Foundation.

Critics have praised this exceptional ensemble’s unique combination of soloist bravura and chamber music sensitivity:»The musicians communicate between each other with technical brilliance, precision, freshness, passion and a rich palette of colours.« All five players are members of prestigious German orchestras or teach as university professors. In the quintet, they come together to form a homogeneous group characterised by subtlety of expression, refined ensemble playing, charismatic joy in performing and interpretive authenticity.

The members of the Acelga Quintet met while they were playing in prominent youth orchestras and academies, such as the European Union Youth Orchestra, the Schleswig-Holstein Festival Orchestra, and the Orchestra Academy of the Bavarian Radio Symphony Orchestra. As a quintet, they have developed a broad and varied repertory that includes the classics of the quintet literature, arrangements of well-known compositions and rarely performed works that range from the early classical period up to the 21st century. The group continually explores all the possibilities for dynamic contrast and sound colour inherent in this exciting instrumental combination. »No other ensemble dared to risk so much dramatic vitality and variety of nuance«, wrote the Süddeutsche Zeitung after Acelga Quintet’s performance at the prestigious ARD Music Competition. 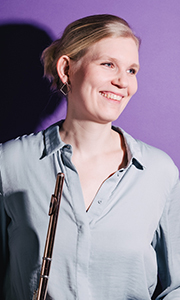 grew up in Aachen and studied flute with Andrea Lieberknecht at the music conservatories in Hanover and Munich. She received scholarships from the German National Merit Foundation, the Deutsche Stiftung Musikleben, and Yehudi Menuhin Live Music Now. She has won numerous prizes at international competitions, such as the Nicolet Competition in Beijing and the German Music Competition. In 2012 and 2013, Mangold was included in the German Music Council’s Young Artists concert series. She completed an apprenticeship with the Gürzenich Orchestra in Cologne and was a member of the Orchestra Academy of the Bavarian Radio Symphony Orchestra. Hanna Mangold is currently Co-Principal Flute of the Deutsche Staatsphilharmonie Rheinland-Pfalz in Ludwigshafen. 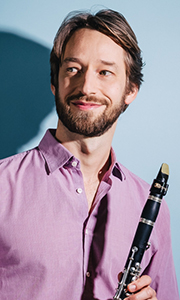 studied with Eduard Brunner at the Saarland Music Conservatory. While still a student, he won First Prize in the woodwind division of the Walter Gieseking Competition and he was a member of the Junge Deutsche Philharmonie as well as a frequent guest at the International Music Festival in Kreuth. After completing his studies with a concert diploma, Kircher was accepted into the Orchestra Academy of the Bavarian Radio Symphony Orchestra. Since 2008, he has been Co-Principal Clarinet of the Deutsche Staatsphilharmonie Rheinland-Pfalz in Ludwigshafen. As Principal Clarinet, Kircher has performed with prominent orchestras such as the Frankfurt Radio Symphony Orchestra, the Deutsches Symphonie Orchester in Berlin, the Bavarian State Orchestra, the German Radio Philharmonic in Saarbrücken/Kaiserslautern and the Württemberg Chamber Orchestra in Heilbronn. 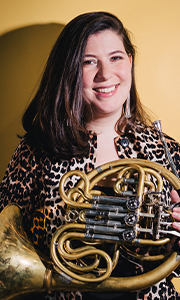 studied with Sibylle Mahni in Frankfurt and later with Marie-Luise Neunecker in Berlin. After five years in the European Union Youth Orchestra and a one-year apprenticeship with the Deutsches Symphonie Orchester in Berlin, Amanda Kleinbart was named Principal Horn of the Saarland State Orchestra in 2012. Since 2014, she has been a member of the NDR Symphony Orchestra in Hamburg. Kleinbart has regularly played Principal Horn with the Bamberg Symphony, the WDR Symphony Orchestra, and the Deutsche Kammerphilharmonie in Bremen. In 2013 she was a member of the Lucerne Festival Orchestra under the direction of Claudio Abbado. Amanda Kleinbart was awarded a scholarship in 2011 for her performance as a soloist in the German Music Competition and she won the Richard Strauss Competition in Munich in 2014. 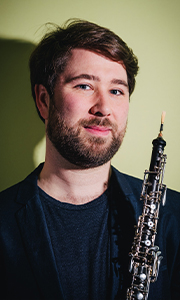 studied with Klaus Becker in Hanover. He gathered orchestral experience in the Junge Deutsche Philharmonie, the Gustav Mahler Youth Orchestra and the Schleswig-Holstein Festival Orchestra. In 2008 and 2009, Poyault was Principal Oboe at the Komische Oper in Berlin and later a member of the Saarland State Orchestra, the Deutsche Staatsphilharmonie Rheinland-Pfalz and the Braunschweig State Orchestra. Since 2015, he has been Co-Principal Oboe of the Gürzenich Orchestra in Cologne. At the age of 22, Poyault received a scholarship from the German Music Competition and was selected for the German Music Council’s Young Artists concert series. In 2007, he was a prize winner at the Richard Lauschmann Oboe Competition in Mannheim. 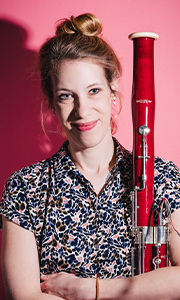 studied with Georg Klütsch in Cologne. She was a member of prominent youth orchestras, such as the European Union Youth Orchestra, the Junge Deutsche Philharmonie and the Schleswig-Holstein Festival Orchestra; she also completed an apprenticeship with the Gürzenich Orchestra in Cologne. From 2011 to 2014, Antonia Zimmermann was a member of the NDR Radio Philharmonic in Hanover. She is currently Co-Principal Bassoon with the Deutsche Staatsphilharmonie Rheinland-Pfalz in Ludwigshafen. Zimmermann has also performed regularly with the Bamberg Symphony, the WDR Symphony Orchestra and the Frankfurt Opera and Museum Orchestra.